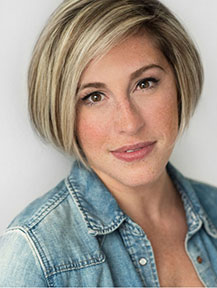 “Belgian-Italian native, Melissa follows the arts scene very closely internationally, as well as at home in Toronto. A graduate of Sheridan College’s Honors Bachelor in Music Theatre Performance, she has been able to work on original Canadian productions such as Prom Queen: The Musical, and  Dora- award winning musical Brantwood.

As a bilingual performer Melissa works also with the francophone community as much as possible and can be seen in a short webisode series via AMI (Accessible Media Inc). She’s worked with such theatre groups as DuffleBag Theatre in their French troupe for kids as well as for Electric Moon Theatre north Toronto. Selected theatre credits include: In the Heights,  The Yoga Musical (new Canadian work), Godspell, Parade- in Concert (A Night at the Lincoln Centre, NYC), Bye Bye Birdie. Mel’s number one priority, show kids that music can be an outlet as well as a career if they truly wish it to be!”

Melissa is a key part of our piano and vocals instructional team! Come in and visit her at Capstone Music Burlington!

BOOK LESSONS OR A VISIT!