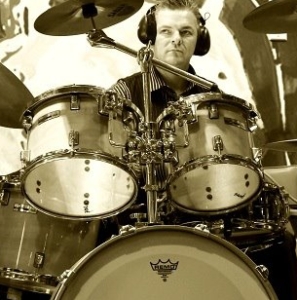 Tims first lessons began at age 10 where he became enrolled in a life long journey to learn all he could about drums – and music.  At 14 he played his first gig and never looked back.

Tim has played in many different bands over the years,  (and has played virtually every type of gig)  From Clubs/Bars to Cruise Ships and Theatre. As well as travelling all over North America with various touring acts playing for crowds in the thousands.

He received his music degree at Mohawk College in Hamilton On, where he studied with local greats, Kevin Dempsey, Ernie Porthouse, Paul Delong, Rick Gratton.

Tim has also studied at the world famous Drummers Collective in New York city in the mid to late 90’s.While in New York he took private lessons with the legendary Joe Morrello, of Dave Brubeck fame.

In addition to his home studio he has taught lessons and clinics at some very high profile schools that include Burlington’s own Capstone Music.  Tim was also added to Hudson Music Magazine’s “Featured Drum Teacher”section in March 2011.

As an active member of Vic firth’s PDT, (private drum Teachers) group he has had the privilege of educating thousands of people with various masterclasses and drum clinics. He just completed a 30 clinic tour this past summer spreading the joy of drums and music.

Currently on top of a busy teaching/clinic schedule, Tim is also busy performing regularly with his bands CLEAN SL8 and 80’s Tribute PUPPETSHOW. Tim’s passion for music and drumming can be felt every time he plays or teaches on this wonderful instrument.

Do you have the love for drums and music? If so, Tim or one of our drum instructors are here and ready to get the beat going!