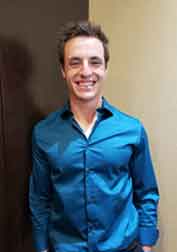 Alex is a passionate, up-and-coming jazz pianist who’s been playing piano since 2004. He graduated from the Applied Music program at Mohawk College as an honorary student where he studied Jazz piano from some of the best musicians in Canada, such as Adrean Farrugia, Robert Fekete, Pat Collins, Darcy Hepner, Bob Shields, and Kevin Dempsey. After Mohawk, Alex went on to study music at Humber College where he played with the top ensembles and had the privilege of studying with Kirk MacDonald, Brian Dickinson, Mike Downes, and Robi Botos.

In addition to teaching piano since 2013, he has performed in places such as the Burlington Performing Arts Centre, the 2015 Brantford International Jazz Festival, has been a member of the Hamilton All-Star Jazz Band, has, and continues to, play at many venues across the Greater Toronto and Hamilton Area, and has many solo projects underway.

Come in and meet Alex and the rest of our piano and musical artists teaching our local youth here in Burlington!

BOOK LESSONS OR A VISIT!